Weigh beams, which are also known as weigh bars, are designed for placement under platforms, crates, crushes and wool-presses.

Shock absorbing rubber mounts protect the loadcells and maintain weighing accuracy despite distortion or expansion/contraction of the crate or crush to which the bars are fitted.

In addition to livestock weighing, our  range of standard weigh bars are widely used for non-trade industrial applications, such as pallet weighing in warehouses.

The Iconix standard weigh beam is our most popular and versatile weigh bar set.

The FX1 is the entry level electronic weighing system from Iconix. The FX1 is simplicity itself – just turn it on and “you’re weighing”.

There are two weighing modes:

Iconix heavy-duty weigh beams have high weighing capacity, making them are ideal for use under large cattle crushes and similar applications.

Diverseco supplies stainless steel, wet area weigh bar systems for trade approved applications involving the purchase and/or sale of products. If trade approval is required, they weigh bars must be permanently fixed to a location and certified in that location by a registered scale company, such as Diverseco. If you wish to relocate the weigh bar set in future, it must be recertified in the new location.

All the Features & Functions You Need 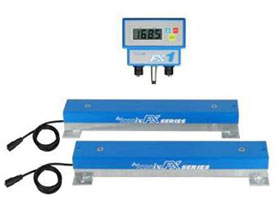