In our featured image above Diverseco CEO Mr Brenton Cunningham is pictured with Doosan Robotics CEO Mr Byungseo Lee during the agency signing ceremony at Doosan Robotics headquarters in Korea.

According to Diverseco CEO, Brenton Cunningham, “the agreement with Doosan Robotics will see Diverseco supplying a range of collaborative robots (cobots) into the Australian market. The cobot range comprises four different models – the M0609, M1509, M1013 and M0617.”

“The cobots from Doosan are part of a broader strategy for Diverseco to continue expansion of its automation division by adding best-in-class robotics agencies to an already impressive lineup that includes Kawasaki Robots, OnRobot plug and play end effectors and others – and watch this space too please because there is more to follow.” 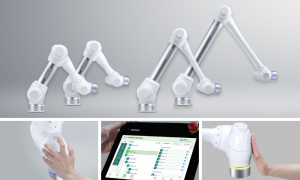 Above: the four Doosan Collaborative Robot models and below centre the Doosan Cobot Teaching Pendant

The M0609 is a compact cobot that has a 6 kg payload capacity, a 0.9 m reach radius and is designed to perform quick, routine and repetitive tasks.

The M1509 has the market’s largest payload available at 15 kg as well as a 0.9 m reach radius and is designed to handle heavier objects that could pose a potential health and safety risk to humans.

The M1013 is a versatile cobot with a 10 kg payload capacity, a 1.3 m reach radius and is suitable for a wide range of tasks.

The M0617 has the largest reach radius on the market at 1.7 m, plus a 6 kg payload capacity and is designed to perform tasks that require a longer reach.

All 6-axis cobots feature six torque sensors (one for each axis) mounted on their articulated arms, which makes them inherently safe. The cobot arms are accurate (+/- 0.1 mm repeatability) and fast with a TCP (Transmission Control Protocol) speed of 1 m/s. 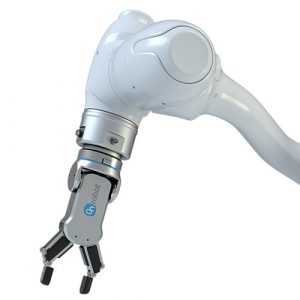 Above: OnRobot RG 2 Gripper on a Doosan Cobot

Says Brenton: “Doosan Robotics’ cobots are easy to use and simple to install. The torque sensors on each of the cobot arms detects the slightest impact and reacts instantly. This and the other design features mean the cobots are safe and that they should not need to be fenced in or caged, depending of course on the actual application.”

As well as different capacity and capability cobot arms, every model is also supplied with a control unit (490 by 290 by 287mm) and a robust and lightweight (0.8 kg) teaching pendant with a 10.1” capacitive touch screen.

Doosan cobots are ideal for lower payload and lower cycle-time activities that involve working near humans such as machine tending, assembly, pick and place, packaging and palletising and much more.

The cobots can be easily re-deployed when combined with plug and play end effectors like On Robot grippers also available from Diverseco.

Note: Articles published prior to 1st July 2019 refer to past trading names of companies in the Diverseco group.
Go to Top